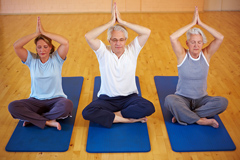 You might have read about a study published last week in the Archives of Internal Medicine that showed yoga helps with low back pain.

Now there’s similar study out today in the Annals of Internal Medicine (one must be careful about confusing the Annals with the Archives!). British researchers compared a 12-week yoga program with usual care provided by the National Health Service (please hold your wise cracks about the National Health Service). Their results showed that yoga classes were more effective than routine care at improving “back function,” which means it reduced back-related problems that interfered with everyday activities like walking, standing, climbing stairs, and so on.

Yoga wasn’t a total success, though. The 156 people in the yoga group reported pain levels that were similar to the 157 randomly assigned to get usual care.

Like today’s study in the Annals, last week’s study in the Archives was sizable (228 volunteers), which is usually a good sign. Too many studies of yoga—and of alternative medicine in general—have too few subjects, so they can’t be anything but the trial balloons of health research: creative and thought-provoking but rather easily shot down.

Other good things about the Archives study: it was conducted by investigators in the research branch of Group Health Cooperative, a large nonprofit health care organization in Seattle with an excellent reputation, and was funded by National Center for Complementary and Alternative Medicine, which is part of the National Institutes of Health and was created about 10 years ago for the express purpose of evaluating nontraditional treatments like yoga in well-designed trials.

The Archives study included a small “self-care” group for comparison purposes. But what makes the study stand out—and, in my opinion, more interesting than the British study in the Annals—is that the main comparison was between yoga and exercise classes that were specially designed for the study. The exercise classes included some warm-ups and strength exercises, but most of the time (about 50 minutes) was spent taking people through 15 different stretching exercises targeting the trunk and legs.

As the study’s lead investigator, Karen Sherman, noted in a video made by Group Health to publicize the study, the yoga and the exercise classes were pretty similar from a physical perspective. She also points out that all that stretching, done carefully for almost an hour, may have had some of the relaxation effects of yoga.

So you might say the study compared yoga with the very yoga-like.

And the results showed that it ended in a tie, with yoga and the exercise classes having a similar effect on people’s back pain, as measured by self-reported “bothersomeness” and, as in the British study, by the effect on back-related problems with walking, standing, and so on.

So where does this leave us? Several thoughts come to mind.

First, it’s been shown over and over again that while exercise may not cure all that ails us, it can reliably ameliorate many conditions. The problem is getting ourselves to “just do it”—and in a regular way. My hunch is that yoga does have some special—perhaps unique—effects on people. But any endeavor that creates some kind of obligation to exercise is likely to be beneficial if it induces regular exercise, be it yoga classes, muscle-stretching exercise classes, zumba workouts, or simply a regular walk.

Second, yoga is now commonly available. Virtually every health club and Y offers yoga classes, and yoga studios seem to be everywhere. Because it is so common, yoga has the added advantage these days of being a practical choice.

In an email to me, Karen Sherman, the Group Health investigator, agreed that yoga classes will be more accessible to back pain patients than specially designed stretching classes. “However, there will be some people who would find yoga ‘weird’ or ‘against their religion’ and for those folks, I hope some PTs [physical therapists] offer an intense stretching class,” Sherman wrote.

But I wonder whether yoga has lost most, if not all, of its weirdness factor because it is so common. What do you think?

And a third thought: while yoga is generally safe, if you are using it to treat a condition, it’s good idea to talk it over with the doctor who is treating that condition, especially if the condition is back pain.

Yoga may be good for many bad backs, but it may be too much for some of them. In the British study published in the Annals, five (3%) study volunteers who were randomized to yoga reported that their back pain increased and that the increase was related to yoga. Three others had pain elsewhere that they believed was related to yoga.

And in the Group Health study in the Archives, 13 of the 87 (15%) yoga class participants reported mild to moderate problems that were mainly related to back pain, and one person suffered a herniated disc.

Related Information: Low Back Pain: Healing your aching back