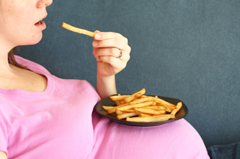 Heart disease. Stroke. Diabetes. Asthma. Osteoporosis. These common scourges are often pegged to genes, pollution, or the wear and tear caused by personal choices like a poor diet, smoking, or too little exercise. David Barker, a British physician and epidemiologist, has a different and compelling idea: these and other conditions stem from a developing baby’s environment, mainly the womb and the placenta.

Barker was the invited speaker at this year’s Stare-Hegsted Lecture, which is a big deal at the Harvard School of Public Health. In just over an hour, he covered the basics of what the British Medical Journal used to call the Barker hypothesis. It has since come to be known as the developmental origins of chronic disease. (You can watch the entire talk here.)

It goes like this: During the first thousand days of development, from conception to age 2, the body’s tissues, organs, and systems are exquisitely sensitive to conditions in their environment during various windows of time. A lack of nutrients or an overabundance of them during these windows programs a child’s development and sets the stage for health or disease. Barker and others use low body weight at term birth is a marker for poor fetal nutrition.

When a fetus is faced with a poor food supply, it shunts nutrients to its most important organ, the brain. The heart, kidneys, muscles, bones, and other tissues don’t develop as they should. The nutrition debt they incur appears years later as one or more chronic diseases.

According to Barker, four factors influence a baby’s development:

“The least important of these is the mother’s diet during her pregnancy,” Barker told the assembled crowd of Harvard students and faculty members. “A baby lives off its mother’s lifetime nutrition.”

The take-home message is that growing healthy children requires improving nutrition for girls and women through their lifetimes, not just during pregnancy.

So far, Barker’s idea is just an interesting hypothesis. Some data support it, other data refute it. Some researchers, like Harvard’s Matthew Gillman, believe there’s more to the story. One problem is that birth weight is a “dreadful marker” for prenatal influences, as Gillman writes in the New England Journal of Medicine. Another is that so-called catch-up growth during infancy or youth may compound the effects of prenatal programming. Several studies suggest that the combination of low weight at birth and becoming overweight early in life is a potent recipe for later heart disease.

Even though the developmental origins of chronic disease is still an idea in gestation, it has gained some popular attention. For example, science writer Annie Murphy Paul covered the idea in her book, Origins, which was featured on the cover of Time magazine in September 2010.

It’s still a bit too soon to base public health messages on Barker’s hypothesis. But it does reinforce the simple idea that a healthy diet in youth, adolescence, young adulthood, and pregnancy is one of the best gifts a woman can give to her future children and grandchildren.

Related Information: Healthy Eating: A guide to the new nutrition