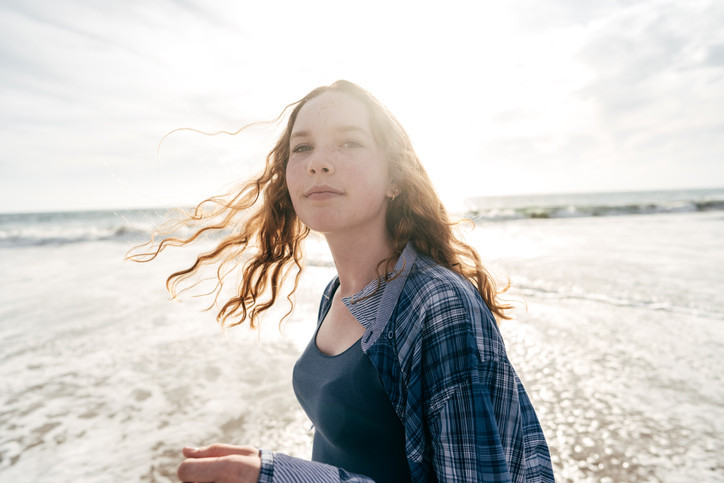 As the summer warmth lures us outside, parents may be struggling to get their teenagers to follow sun protection guidelines. It can be challenging to catch the attention of younger people, for whom health concerns such as skin cancer feel like a lifetime away. One promising strategy for educating teens about sun-protective behavior is to appeal to their vanity and meet them where they are — on their smartphones.

A recent study in JAMA Dermatology looked at the impact of using a face-aging mobile application on sun-protective behaviors in a group of Brazilian high school students. The face-aging mobile app used in the study, called Sunface, allows the user to take a selfie and shows what they might look like in five, 10, 15, 20, and 25 years, based on three levels of exposure the user selects: sun protection, no sun protection, and weekly tanning.

The face-aging mobile app modifies selfies by adding skin changes from chronic ultraviolet (UV) radiation exposure, such as from the sun or tanning beds. Signs of photoaging (premature aging of the skin from chronic sun exposure) include brown spots, increased facial wrinkles, uneven skin pigmentation, enlarged or broken blood vessels, and actinic keratoses (gritty rough spots that are precursors to skin cancer). While the accuracy of the face-aging app algorithm is unclear, it creates a reasonable facsimile of the effects of chronic sun exposure.

Study finds teens may be motivated by vanity

The JAMA Dermatology study authors divided the high school students into two categories. One group of students was shown the effects that UV exposure could have on their future faces via the app. The app also provided information about sun protection. The control group did not receive any intervention or sun protection education. At the start of the study, the researchers collected information from all study participants about their sunscreen application, tanning bed use, and performance of skin self-examinations. They then followed the students over six months to re-assess for changes in baseline behaviors. The study was led by the app developer.

In the face-aging app group, the percentage of students using sunscreen every day increased from 15% at the start of the study to 22.9% at the six-month follow up. There was no increase in sunscreen use in the control group. There was also an increase in the proportion of students in the face-aging app group who performed at least one skin self-examination during the six months of follow-up. There was no corresponding increase in the control group. Finally, while use of tanning beds had decreased in the mobile app group at the three-month follow up, tanning bed use returned to nearly baseline six months after students used the face-aging app. This is troubling, because indoor tanning increases the risk of skin cancers, including the deadliest form, melanoma.

The face-aging app had greater impact on high school girls, meaning boys were less likely to be motivated by appearance-based educational efforts. Over a lifetime, men are more likely than women to develop and die from melanoma, so other methods are needed to promote sun-safe behaviors in teenage boys.

One limitation of the study is that because students in the control group did not receive any basic sun protection education, it is not 100% clear whether the app’s face-aging simulation, the UV protection information provided by the app, or some combination of the two was responsible for the study findings.

Early sun-protective behaviors can have a lasting impact

Early sun-protective behaviors can have a lasting impact on the development and appearance of photoaging, and can reduce the risk of developing skin cancer. Beginning in infancy, children should be kept out of direct sunlight and covered with sun-protective clothing with an ultraviolet protective factor of 50+. Sunscreens are safe for infants starting at 6 months.

During adolescence and beyond, a tanned appearance is often associated with youthfulness and health. Instead of using a tanning bed, opt for a sunless tanning cream to achieve a similar effect — but be sure to apply a sunscreen, since tanning creams generally don’t contain sun-protective factor unless explicitly stated on the label. Another option is to apply a tinted sunscreen.

The following tips can help reduce photoaging and risk for skin cancer.

While this is an excellent educational tool, more emphasis needs to be place on sun avoidance, protective clothing and use of non-organic “chemical” sunscreens during pregnancy, nursing and in early childhood for the following reasons:

Article Quote: “Sunscreens are safe for infants starting at 6 months”

Concern: Although this has been the current recommendation by FDA for many years, one must remember that FDA is currently reevaluating sunscreen chemicals for human safety/efficacy “Because the public record does not currently contain sufficient data to support positive Generally Recognized As Safe & Effective (GRASE) determinations” as noted in Federal Register /Vol. 84, No. 38 /Tuesday, February 26, 2019 / Proposed Rules. With that said, there are several papers available that demonstrate that oxybenzone (AKA benzophenone-3) is found in human breast milk in a form that neonates and young children cannot detoxify. This is why Sweden recommends not using oxybenzone sunscreens on children 2 years and under (https://www.eurekalert.org/pub_releases/2006-11/src-swb110606.php). On a similar note, Switzerland does not recommend the use of octinoxate (AKA ethylhexyl methoxycinnamate) in children 4 years of age and under, because the exposure level in the summertime exceeds the level of octinoxate reported to cause thyroid toxicity (https://pubmed.ncbi.nlm.nih.gov/25454242/).

Additionally, oxybenzone was the only chemical that caused a negative impact in young girls who’s mothers tested positive for the chemical during their third trimester as reported in “Prenatal exposure to environmental phenols and childhood fat mass in the Mount Sinai Children’s Environmental Health Study” https://pubmed.ncbi.nlm.nih.gov/27037776/ and several sunscreen actives were reported to impact development in young children as reported in “Organic UV filter exposure and pubertal development: A prospective follow-up study of urban Chinese adolescents” https://pubmed.ncbi.nlm.nih.gov/32679395/

Thank you for reporting on ways to improve sun-protective behaviors.

This post is very important. Teenagers and young adult women under age 30 years represent a high risk group where skin cancer (mostly melanoma) is a leading cause of cancer death, second only to a MVA as a cause of death in that age group. Skin cancer rates have doubled and tripled in the USA and the world in general, over the 60 years of using petrochemical soluble UV filters. Appealing to their vanity is the best way to motivate young adults to use a TRULY BROAD SPECTRUM sunscreen. Problem is most sunscreens with a high SPF may have inadequate levels of UVA protection. More on this later.
SPF as measured in a lab under a lamp does not reflect performance in actual sunlight, which has 6X more UVA than the lamp emission in the UVA range. A study presented at The Photomedicine Society 4 years ago showed that the SPF of sunscreens labelled over 50 had values < 15 measured with the same protocol in sunlight. Professor Brian Diffey applied the laws of basic physics to the UVR transmission paradigm through a sunscreen, and showed that the true SPF cannot actually exceed 25. No matter! The way to prevent skin cancer and photoaging is more to do with the UVA-Protection Factor (UVA-PF) of a sunscreen, measured accurately in vivo, using Hybrid Diffuse Reflectance Spectroscopy (HDRS). The only two easily available UVA filters in N. America are avobenzone – a petrochemical UV filter confirmed by the FDA to be bioavailable along with the other 11 in Category III, as needing more data to be considered safe or effective- and zinc oxide – one of two mineral filters categorized by the FDA as generally safe and effective. Using HDRS, 3% avobenzone or < 15 % zinc oxide in commercial sunscreens achieve an inadequate UVA-PF of 5-8. Common brand names using combinations of the 12 Category III UV filters provide UVB-BIASED protection where up to 10X more UVA is transmitted through the sunscreen to your skin. This provides asymmetric UVA damage just like going to a tanning bed with the same likely consequences – more skin cancer and increased photoaging – may also explain the steady rise in skin cancer rates despite sunscreen use.
Teenagers need an esthetic high UVA product – best afforded by high zinc oxide levels at 25% active concentration. Many dermatologists and physicians still describe high zinc oxide with or w/o titanium dioxide as being chalky white. A pure zinc oxide product at 25% will afford UVA-PF levels on HDRS of 12 to 20.4 – the ultra UVA protection to actually prevent skin cancer and premature aging. Professor Diffey showed by a computer model many years ago that daily use of a truly broad spectrum sunscreen with high levels of UVA filters and protection, will give an appearance of a 45 y/o at age 70. Teenagers will only use a very esthetic product – now available in 25% zinc oxide sunscreens. Former First Lady Michelle Obama was reported to use such a product in FEB 2019, and Venus Williams uses and launched a 25% zinc oxide in her ‘Eleven’ line of skin care products. Transparent or clear application on any colour skin.
Safety must pre-empt even efficacy. For twenty years I have advocated that all consumers avoid soluble aromatic UV filters – now in the FDA category III – that over 25 years of scientific literature and now confirmed by the FDA show – are bioavailable to humans including the fetus. They are all structurally and functionally related to other hormone disruptors like petroleum products, pesticides, BPA, and phthalates. There is no way to assess the toxicity to a fetus or young children when these petrochemical filters reach every cell in your body. Best just to avoid them – particularly if there may be little or no benefit from using them. Insoluble filters – including zinc oxide- do not permeate normal skin- and avoid any risk of adverse effects while providing better protection. Shade and protective clothing work – Professor Diffey advised us in 1991 – that a good sunscreen – truly broad spectrum – should achieve uniform protection against UVB and UVA – approaching the protection provided by textiles and shade – now available worldwide by using the INSOLUBLE UV filters like zinc oxide, and new filters not approved in the USA like bisoctrizole. By the way – mineral filters may also be safer for the coral, wildlife and the environment than the petrochemical UV filters that now pollute the entire global biota. The Precautionary Principle applied for humans and the environment – embraced by young people who worry about the environment. Protecting nature while looking younger for longer.